The terrorist attacks of 2001 forever changed the world – launching three conflicts – two armed struggles overseas and a campaign against undocumented immigrants within our borders. The War on Terror included sealing our southern border and going after undocumented immigrants who had lived here peacefully for 10, 15 and even 20 years. They were made into a threat. In December of 2005, the House of Representatives quietly passed HR4437, also known as the Sensenbrenner Bill. The punitive measures included in the bill would have made undocumented immigrants and anyone helping them (family members, clergy, social service agencies, etc.) into criminals. 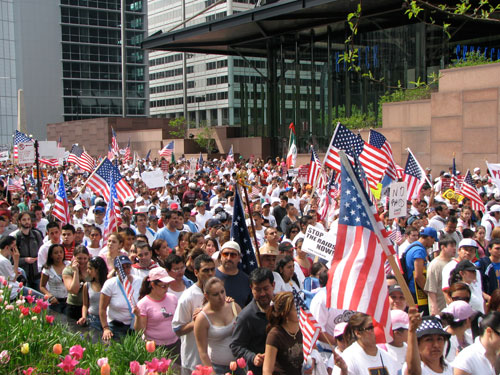 After the bill passed, the winter progressed quietly; there was little protest and no voices clamored for justice. In fact, few people spoke publicly about the

bill’s possible effects or how to stop it. Yet, the silence gave no sign of the storm that would boom across the nation on March 10, 2006, and give birth to the largest struggle for rights since the 1950s and ‘60s. That day, over 700,000 people (according to activists) marched peacefully through Chicago and shook the country from its slumber. It was unprecedented in U.S. history and sparked an even greater number of people (750,000) to march in Los Angeles just 15 days later. The protests climaxed on May 1, 2006, when immigrants and their supporters marched throughout the country in a national demonstration. The marches stopped the bill, but could not stop the backlash and continued scapegoating of immigrants.

The Minuteman Project became more active. Pundits such as Lou Dobbs grew louder. Elvira Arellano, one of the leaders of Chicago’s pro-immigrant community, was ordered to appear before immigration authorities. On August 15, 2006, she faced certain arrest and deportation. Instead of turning herself in, she sought refuge at the Adalberto United Methodist Church on Chicago’s North Side, and thus became the symbol of the struggle of millions. 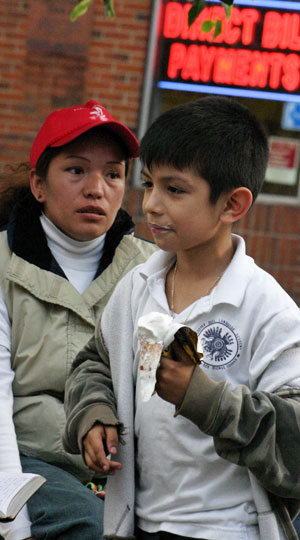 This is the story of Elvira's journey from the protests to the church and to her eventual deportation. We also intertwine the story of the greater movement’s birth and struggle for immigration reform in an environment of intolerance.